Medicare is on life support but just got some good news. Apparently the social welfare program for seniors and disabled can live another 2 years. But Obamacare  cuts threaten to gut the program, especially to Medicare Advantage. 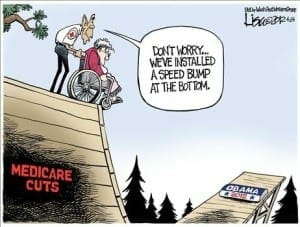 Medicare has two more years to live than previously thought. The program’s trustees recently estimated that the “depletion date for the trust fund is 2026, two years later than was shown in last year’s report.”

But that conclusion is less a vote of confidence than a two-year stay of execution. Absent substantial reform, Medicare will eat up more and more of our nation’s resources even as it provides less and less to beneficiaries.

Is Your Nest Egg SlowlyDying?

If you bought a Medicare supplement plan from Blue Cross or Mutual of Omaha you are slowly killing your life savings to the tune of $30 – $50 per month. That’s over $400 per year you are just GIVING AWAY and getting nothing in return.

Almost every time we help you shop and compare you will save money. Free, no obligation Medicare supplement quotes in 60 seconds.

For the last 5 years Medicare has paid out more in claims than it took in to the “trust fund”. There is no sign of abatement as boomers turn 65 and the economy limps along supported by college educated part-timers who cannot find full time work.

The projections are “based on the trustees’ intermediate set of assumptions,” which include sharp reductions in payments to doctors and other providers that Congress has routinely overruled in the past.

In other words, this rosy picture assumes doctors and hospitals are willing to work for less money.

If you are on Medicare, listen up.

Obamacare simply takes money out of Medicare and lavishes it on other programs, such as Medicaid. The original Congressional Budget Office estimate of the cost of the law was $940 billion over 10 years. Earlier this year, the agency revised its estimate to $1.8 trillion over the decade 2014 to 2023.

Further, Obamacare slashes the portions of Medicare that have the best hope of reducing health costs in the long term – those governed by market competition.

Providers are paid less and your cost increases.

Got a problem with that?

For instance, the law will trim about $150 billion from Medicare Advantage (MA) over the next decade. MA, which covers 25 percent of Medicare recipients, allows seniors to pick from plans administered by private insurers.

With each cut you have fewer choices and pay more every time you use your plan.