Medigap plan F is quite popular in Georgia, but is it a good value? Not in my opinion. Medigap plan F is one of the highest cost Medicare supplement plans and in most cases is way overpriced.

Recently I was asked to compare an existing Medigap plan F against other carriers. This individual had Medigap plan F through USAA, a very solid and competitive carrier. His current rate was $10 less than my best rate for the same plan.

But the story doesn’t stop there.

USAA uses a community rating system and will be increasing everyone’s rates in January, 2012.

The same is true for Blue Cross and AARP. They will be increasing rates for their policyholder in January as well. Even if you bought from them in October of 2011 your rates will increase in January.

What fun is that?

At this point we don’t know how much the rates will change but they will go up.

If he bought the same plan F now (from a different carrier) his rate would hold for 12 months.

While we can’t calculate the savings now for plan F vs. his new rate, I can tell him with certainty that enrolling in plan G will save him more than $300 per year vs. his current plan. Also, USAA does not offer a plan G so they are effectively saying this is what we offer, take it or leave it.

Medigap plan F is the most popular so many carriers will price that product competitively on new business but will not be as aggressive on the value oriented plans such as G.

The spread will become more pronounced over the years as Medicare supplement plan F usually has higher rate increases than the other plans. So over time, plan F becomes increasingly more expensive while the other plans deliver more value.

Medigap plan F is a ripoff that is heavily promoted by carriers and agents that seek to take advantage of GA seniors.

If you have plan F, especially with a carrier such as AARP, Blue Cross, or USAA you should compare Medigap rates now and lock in a lower rate for 12 months.

When you pay more you don’t get more, it simply means you paid too much. That’s just like pouring money down the drain.

Bob Vineyard at Georgia Medicare Plans can help you find the lowest Medigap rates in your area. 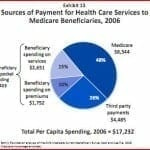 A good Medicare supplement plan from BCBSGA will help you pay for your Medicare deductibles, copay’s and coinsurance. Without a supplement plan you will pay these items out of your own pocket and what senior can afford that?

BCBSGA Medicare supplement plans and BCBSGA Medigap plans pay for charges approved by Medicare but not covered by Part A or B.

You Can Trust Blue Cross

Why Should You Buy a Blue Cross Medicare Supplement Plan F?

With BCBSGA supplement plan F you have the following:

How Do I Apply for a Blue Cross Medicare supplement plan?

You can apply direct with BCBSGA or use the services of an agent (such as Georgia Medicare Plans) that represents many carriers including Blue Cross. Independent agents such as myself have access to all the major Medigap carriers in Georgia, including BCBSGA. We have the same rates and plans that you get when you apply direct.

My clients always have access to me any day of the year. You don’t have to wait until the carrier is willing to take calls during their “bankers hours” and I promise you will never hear “Press 1 for English” when you call me.

Georgia Medicare Plans has affordable Medicare supplement plans in Georgia from BCBSGA and other carriers to fit almost every need and budget.