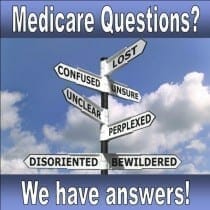 Medicare things you don’t know (but wish you did). Questions you never asked because no one told you. And you will pay dearly if you are not prepared.

You may think you understand Advantage plans but my guess is there are things in this video that will shock you.

Almost everyone LOVES their Advantage plan until they have to use it. I get calls all year long from folks who say they can’t afford their Medicare plan and want a supplement.

Most GA Medicare Advantage premiums are $0. If they can’t afford their plan there’s a good chance they are incurring hundreds or even thousands of dollars out of pocket for claims.

I have a friend that has been bragging about his plan ever since he went on Medicare. He thought I was foolish for paying “all that money” every month for a Medigap plan.

A few years ago a cancer diagnosis was a shock. His provider had grant money to pay for his treatment so his out of pocket was minimal.

Now the Cancer is Back

Gary is learning things about Medicare he did not know. Such as prior authorization.

Before he can have a test ordered by his doctor, the carrier must APPROVE the test. It’s all about the money.

His oncologist wants him to have proton therapy but his plan will only pay for a less expensive protocol. Dollars drive many medical decisions when an insurance carrier controls your benefits.

All he wants to do is get well but his Advantage plan is running interference. His carrier is interested in saving money. THEIR money. Not his.

It’s all about the dollars. Just another Medicare thing he did not know.

What is Prior Authorization?

According to the Kaiser Foundation “80 percent of Medicare Advantage enrollees are in plans that require prior authorization for at least one Medicare-covered service“.https://www.kff.org/medicare/issue-brief/prior-authorization-in-medicare-advantage-plans-how-often-is-it-used/

Prior authorization is more frequently imposed for HIGHER COST services.

Medicare Advantage plans can require enrollees to get approval from the plan prior to receiving a service, and if approval is not granted, then the plan generally does not cover the cost of the service.

On the other hand, Original Medicare does not require prior authorization for most services.

There are probably many things about Medicare Advantage plans you did not know. Limited access to care because of prior authorization requirements is probably just one of them.