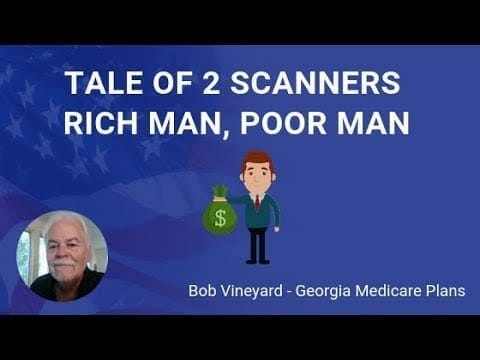 Does where you receive medical treatment make a difference? If two different facilities use the same CT scanner shouldn’t the pricing be about the same?

Ben Hayden had a pain in his abdomen . . . so he went to see his doctor. To rule out anything serious, Ben’s doctor sent him to a free standing imaging center for a CT scan.

The radiologist didn’t see anything wrong on the images, and Ardesia didn’t recommend any treatment.

A few weeks later, Hynden, who has a high-deductible health insurance policy with Cigna, got a bill for $268. He paid it and moved on. – KHN

Then 3 months later the pain returned. Ben’s regular doctor was not available so he saw a nurse practitioner. Thinking Ben might have appendicitis, he was told to go to the hospital ER for a scan.

The results of the scan ruled out appendicitis but this time he had a different problem.

A word of advice.

If you have a choice between going to the hospital ER for a CT scan, and a free-standing imaging center, choose the center.

The results were also the same as the October scan: Hayden was sent home without a definitive diagnosis.

And then the bill came.

Ben was only 29 years old and not on Medicare. But the outcome could have been the same under a managed care Medicare plan.

Over half the Advantage plans offered in Georgia are HMO’s. As long as you use a network provider your claims should be paid. But step outside the network and you could owe the entire bill. What happens if the provider who does your scan is not in network?

An exception could be made in the case of a life-threatening emergency.

But who decides if your case is a true emergency?

If the carrier decides against you, the claim is denied. Do you really want to take that chance?

Original Medicare and a Supplement Plan

Original Medicare does not have networks. You can use any doctor, any hospital, anywhere in the country. Never any penalties for using the wrong provider.

Which makes more sense to you?