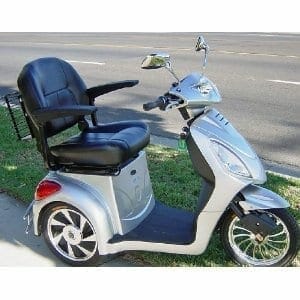 You are here: Home / Medicare / The Scooter Store Raided The Scooter Store, the folks that advertise heavily on TV, are in trouble over Medicare fraud. All those “free” scooters seemed suspicous to me. How easy is it to qualify for one? Does Medicare really approve the purchase of a scooter so easily?

Approximately 150 law enforcement agents from the FBI raided the home office of The Scooter Store looking for evidence of Medicare fraud.

trouble has been part of the company’s legacy.

Its most recent bout began in December when two U.S. senators sent a letter to the Centers for Medicare & Medicaid Services (CMS) wanting to know why The Scooter Store had received as much as $87.7 million in Medicare overpayments from 2009 to 2011 but only had to pay back $19.5 million.

Then, in January, a CBS News report questioned whether power wheelchair companies were “ripping off the government.” One ex-Scooter Store employee told the network the company’s goal is to “bulldoze” doctors into writing prescriptions for power wheelchairs.

Over $87 million in excess Medicare payments but only had to repay $19 million.

What is wrong with this picture?

The power-mobility industry long has been a target of federal probes into Medicare fraud. Authorities want to determine whether unscrupulous firms have billed for providing power wheelchairs to elderly people who don’t have a legitimate medical need for the devices.

A 2011 report by the U.S. Department of Health and Human Services’ Office of Inspector General (OIG) found 80 percent of claims for power wheelchairs did not meet Medicare coverage requirements and should not have been paid for by Medicare.

Oh yeah. I have posted about this issue before.

You would have to pile up an enormous amount of $70 office visits to make up for a $9,000 wheelchair,” he said. “The margins are just great.”

In 2003, the FBI visited with a couple of dozen Scooter Store employees in their homes. Authorities were investigating whether the company had defrauded Medicare, the Express-News reported.

You can buy a decent used car for $9,000, and you don’t even need a license for these things.

The Scooter Store attracted unwanted attention in January when CBS News interviewed former employees who said the company’s main goal is not to help patients but to “bulldoze doctors into writing prescriptions” so it can boost profits.

Once a doctor has written a prescription, CBS News reported, Medicare rarely checks whether the chairs actually are necessary. The company had a program specifically to get chairs for people that doctors already deemed ineligible, according to three former employees interviewed by CBS News.

Seems to me Medicare is just as complicit. If the folks at CMS are willing to hand out OUR money without verifying seems we need to audit Medicare.