You are here: Home / Medicare / Nursing Home vs Home Care

Nursing home operators, faced with soaring health care costs and shrinking Medicare and Medicaid financing, are closing some facilities and embracing an emerging model of care that allows many elderly patients to remain in their homes and still receive the medical and social services available in institutions. 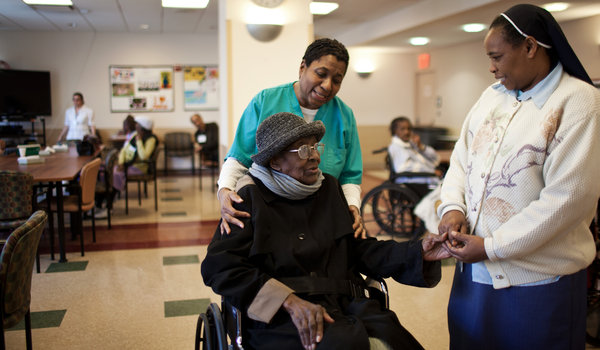 The rapid expansion of this new type of care comes at a time when health care experts argue that for many aged patients, the nursing home model is no longer financially viable or medically justified.

In the newer model, a team of doctors, social workers, physical and occupational therapists and other specialists provides managed care for individual patients at home, at adult day-care centers and in visits to specialists. Studies suggest that it can be less expensive than traditional nursing homes while providing better medical outcomes.

The number of such programs has expanded rapidly, growing from 42 programs in 22 states in 2007 to 84 in 29 states today. In New York City, a program run by a division of CenterLight Health System, formerly known as the Beth Abraham Family of Health Services, has over 2,500 participants at 12 sites in the metropolitan area.

“It used to be that if you needed some kind of long-term care, the only way you could get that service was in a nursing home, with 24-hour nursing care,” said Jason A. Helgerson, the Medicaid director for New York State. “That meant we were institutionalizing service for people, many of whom didn’t need 24-hour nursing care. If a person can get a service like home health care or Meals on Wheels, they can stay in an apartment and thrive in that environment, and it’s a lower cost to taxpayers.”

The recent influx of adult day-care centers and other managed care plans for the frail elderly is being driven by financial constraints as President Obama and Congressional leaders seek hundreds of billions of dollars in savings in Medicare and Medicaid. Nursing homes, which tend to rely heavily on Medicare and Medicaid dollars, are facing enormous financial pressure — Mr. Obama’s proposed budget includes a $56 billion Medicare cut over 10 years achieved by restricting payments to nursing homes and other long-term care providers.

Over the next three years, New York State plans to shift 70,000 to 80,000 people who need more than 120 days of Medicaid-reimbursed long-term care services and are not in nursing homes into managed care models, Mr. Helgerson said.

The move away from nursing homes was highlighted on Thursday when Cardinal Timothy M. Dolan announced that the Archdiocese of New York, one of the state’s largest providers of nursing home care, is selling two of its seven nursing homes and opening or planning to open seven new adult day-care centers over the next three years.

“Seniors and others who have chronic health needs should not have to give up their homes and independence just to get the medical care and other attention they need to live safely and comfortably,” Cardinal Dolan said in a statement before he opened a 250-patient program at Saint Vincent de Paul Catholic Healthcare Center in the South Bronx.

These new adult day-care centers, known around the nation by the acronym PACE — Program of All-Inclusive Care for the Elderly — provide almost all the services a nursing home might, including periodic examinations by doctors and nurses, daytime social activities like sing-alongs and lectures, physical and occupational therapy and two or three daily meals. All the participants are considered eligible for nursing homes because they cannot perform two or more essential activities on their own like bathing, dressing and going to the toilet. But they get to sleep in their own beds at night, often with a home health care aide or relative nearby.

The nonprofit groups that operate them receive a fixed monthly fee for each participant and manage their entire care, including visits to specialists, hospitalizations, home care and even placement in a nursing home. Because Medicare and Medicaid pay set fees instead of paying for specific procedures, center operators are motivated to provide preventive care to avoid costly hospitalizations or nursing home care.

Some elderly people, however, spurn PACE programs because under managed care, they would have to switch their physicians to those at the PACE center or in its network.

Most elderly people want to live out their lives at home, a desire evident in interviews in the PACE center the archdiocese opened in 2009 in Harlem, which has a staff of three doctors and is visited regularly by a dentist, a podiatrist and a psychiatrist.

Edna Blandon, 74, a diabetic weakened on her left side by a stroke who relies on a wheelchair, is transported by specialized van to the Harlem PACE center three days a week and appreciates that it provides not only a home care attendant but sends a nurse every two weeks to change pills in her pillbox and load a 14-day supply of insulin into syringes that she will inject.

“My spirits would drop if I went to a nursing home,” she said. “I love the fact that I can go home at night. There’s no place like home. I can sit down, look at the TV and go to bed when I want.”

James Harper, 70, a retired bank employee who spent 10 months at the archdiocese’s Kateri Residence, a nursing home on the Upper West Side, after a stroke paralyzed his right side, enjoys yoga breathing classes and discussions about black history. Yet he gets to spend nights and weekends with his wife, Albertene, and daughter, Traci, both of whom work during the day and are not around to care for him.

“This way I’m around people,” he said.

The archdiocese, whose new centers will serve a total of 1,500 people, receives an average of $4,000 a month from Medicaid for each participant and $3,300 from Medicare. By comparison, said Scott LaRue, the chief executive of ArchCare, the archdiocesan health care network, a month of nursing home care can cost the government $9,000.

Ultimately, the archdiocese hopes that half of its elderly clients will be served in community settings rather than in nursing homes, which currently serve about 90 percent of the archdiocese’s clients. For-profit companies have not yet moved into the managed care market, in part because of uncertainties about reimbursement formulas and the risks of taking on a nursing home population.

The PACE population tends to be younger than that at nursing homes, which raises the question of whether many PACE clients would really need nursing homes without PACE. Dr. Sherman replies to such skepticism by saying that his clients “need that level of service — the question is where they’re going to get it.”

Without PACE, he said, “they’re going to end up in nursing homes.”