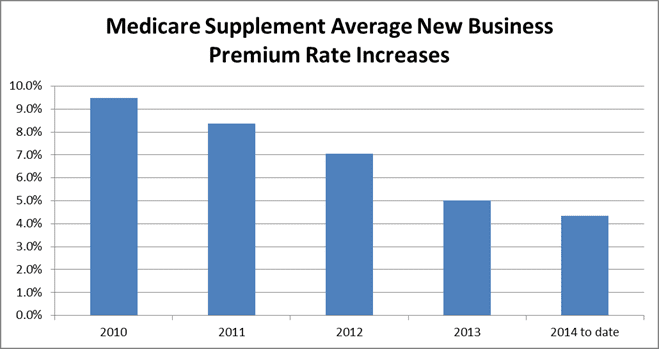 Medicare supplement rates still increase every year but the increases are trending lower. Double digit renewals have declined since 2010. Rate changes on new business have also declined to the 5% range. Prior to 2012 Medigap rate adjustments of 10% to 15% or more were common, especially for the “big name” carriers.

Five things you may not know about Medicare supplement rates

When you are shopping for a Medicare supplement plan there are at least 5 things most agents and carriers will not tell you.

Most agents and carriers promote Medicare supplement plan F. Why?

It is the easiest to explain and understand.

Plan F has the highest rates and generates the most commission.

We have hundreds of Medicare clients yet probably fewer than a dozen bought Medigap plan F.

Medigap carriers come and go. Which one is best for you?

AFLAC jumped into the market in 2012 with low rates and high commissions. Barely 15 months later they bailed out leaving behind customers wondering what would happen next.

We have several carriers with stable rate histories that consistently beat Mutual rates and have never had a double digit rate increase.

Georgia Medicare Plans specializes in finding the best value and low Medicare supplement rates. Our clients save an average of $550 per year without sacrificing coverage.

The real savings comes in matching your Part D drug plan to your needs and budget.

Most people shop drug plans based on the monthly premium. Big mistake.

We recently talked to a lady that was convinced the Humana Medicare Advantage plan was the best value for her. An agent came to her home laid out fancy brochures and carefully explained the merits of this PPO plan.

But the agent failed to run a drug report. Instead, the agent looked over her list of med’s (4 pages worth) and said all your drugs are generic except the insulin, your medications are all covered.

Her projected drug costs for the year were $8800 under the proposed Humana plan.

We actually took the time to input each medication and generate a report.  Only two of her drugs were not on the formulary and 4 were tier 3 or higher.

Medicare Advantage plans are promoted as the greatest thing since sliced bread but there are hidden traps that can rob a retiree of their life savings.

Don’t get lured into low premiums and ignore the real cost of these plans which is the cost of health care.

How to lock in low Medicare supplement rates year after year

Most Medigap plans in Georgia are issue age rated. If you buy your plan at age 65 your rates will never increase just because you had another birthday. When you are 70 years old if you kept the plan you bought at age 65 you are still rated as if you have never aged. Just like Dorian Gray, you never age.

Medicare supplement rates are trending lower. With over 170 different plans to pick from how do you find the one that is right for you? With our help you will never go wrong.